The Electric Cars With the Largest Range 2022

Electric cars are here, they’re getting more and more popular by the day in the UK, and it’s not hard to see why.

First of all, and probably most importantly of all, EVs are much better for the environment than petrol or diesel powered cars. They’re also becoming more powerful with better performance specs across the board, meaning that they tend to be more reliable than petrol or diesel powered cars. This is primarily because of the efficiency of a motor and battery over a combustion engine.

All of this alongside the fact that the UK government are pledging to end the sales of non-electric cars from 2030, and the EV race is well and truly on, so car manufacturers across the UK and beyond are having to step up their operations and go electric with their vehicles.

But one of the key gripes customers have with EVs is the range they can achieve, and just how many miles one of these EVs can get out of a full charge. Nobody wants to deal with numerous trips to a charging point, and everyone wants a respectable distance out of their electric cars.

So, as part of our eco hub guides to electric vehicles, in this section we’ll give you a full rundown of the electric cars and vans with the longest range. We’ll look at the leading brands in the EV race, and find out who can go the distance covering everything from SUVs to city cars, executive cars, saloons, and vans.

Let’s jump in with the longest range electric EVs to look forward to in 2022.

Which 2022 electric car has the longest range?

With 2022 upon us, let’s take a look at the vehicles available this year and see how they compare to the rivals in the area of range.

First up is the Mercedes EQS 450+, which has an astonishing 453 mile range. It’s a luxury limousine of a car and blows every other vehicle out of the water when it comes to range from an EV. Next up is Mr Elon Musk and his Tesla Model S, which has an almost equally impressive 405 mile from one single full charge. BMW come in third again for this particular category with the iX xDrive 50 Sport, which also tops the list for SUVs, by the way, with its incredible 380 mile range for drivers.

The Ford Mustang Mach-E Extended edition is only one singular mile behind the iX with a 379 mile range from a full charge, and the BMW i4 isn’t far behind with a more than respectable 365 miles. We’ll look at Teslas in more detail later, but the Model 3 Long range is an impressive vehicle offering 360 miles from a full charge, and the Model X isn’t far off with 348 miles provided.

A surprising addition to this list comes from Volkswagen and the ID3 Tour’s 340 mile range, which is pretty impressive considering the size of the vehicle compared to the others on the list. The Polestar 2 single motors’ 335 miles comes in just below the VW, and is just ahead of Skoda Enyaq IV 80’s 331 miles.

If it’s over 300 miles its worth a mention, and the Kia EV6 falls into this bracket by offering 316 miles from one charge, and finally, the Hyundai Kona Electric gives drivers a 300 mile range from its’ all electric battery. The Ioniq 5 doesn’t quite make the grade at 298 miles, but still worthy of sneaking into the list.

So, with 2022 covered, let’s break it down by car style, starting with SUVs. 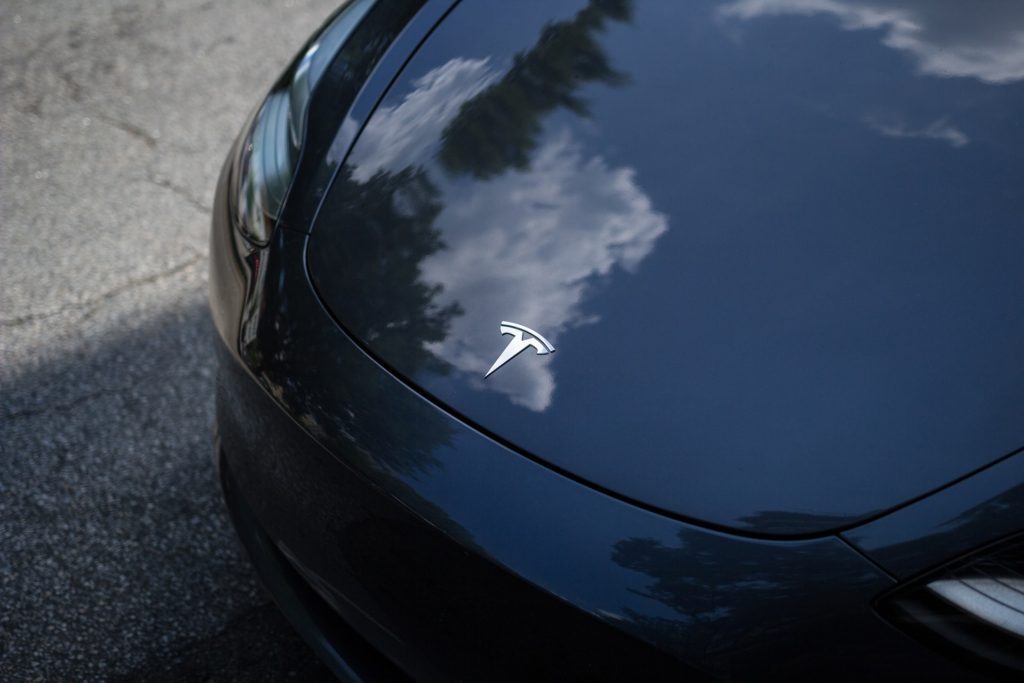 The top spot in the EV SUV race when it comes to range belongs to BMW, with their impressive iX xDrive50. Offering a massive 380 miles from a full charge, it’s one of the best performing EVs on the planet, and is a pretty astounding piece of engineering from the interior to the boot space, motor, and overall design.

Maybe a surprising name comes in at second in the Skoda Enyaq IV, which offers an incredibly impressive 330 miles from a full charge, with the Audio Q4 E-Tron not far off with a strong 316 mile range. In between the two comes an interesting addition from Kia, and their EV6 crossover which gives drivers a very strong 328 miles from one full charge. This puts the model as one of the highest performing cars in the country when it comes to the longest range available.

As you might expect, a key rival for any electric vehicle comes from Elon Musk, and in this case comes in the form of the Tesla Model X Long-Range SUV. As frontrunners and tastemakers in the EV game, it’s no surprise that this particular model offers its owners a 314 mile range. This is followed closely by the Model X Performance, which offers up 301 miles from a trip to a charger.

And finally, sneaking in with 300 miles to a charge is the Hyundai Kona Electric 64KwH. A highly respectable amount and one that rivals pretty much every other style of car on our list.

Unsurprisingly, The Tesla Model S Long Range version is up there with the best of them when it comes to the EV range test. Technically billed as a “liftback”, this Tesla is essentially a hatchback with a sloping roofline. While it’s definitely considered a luxury vehicle and could be used for a range of purposes, we’ve put it into this category just to make things simple.

Offering 379 miles from one full charge, you won’t be scrambling for a charging point numerous times a day if you go with this specific Tesla. The Model 3 Performance isn’t far behind with an impressive 329 mile range, and the fact that Tesla dominate this field is even more appealing to those playing with the idea of buying or leasing an electric vehicle when you realise you also have access to the supercharger network in the UK when you go for a Tesla as your supercar or EV.

But enough about Musk, let’s go to the city.

Longest range EVs for the city

Onto something smaller next, and the top electric cars designed for the city, and specifically, those EVs offering the most range. In first place we have the Fiat 500 E, which provides a range of 199 miles. This is followed by the Seat MII Electric which gives 170 miles, as does the Skoda Citigoe IV. Next up is the Volkswagen E-UP! Which gives drivers a range of 159 miles, and the Honda E which provides 125 miles from one full charge.

The Volkswagen ID3 isn’t technically built for the city, but it is nimble enough to navigate the tightest of roads, even though it’s technically classed as a family car. It offers a range of 260 miles from a full charge, which is really impressive compared to the other city cars on the list. The Renault Zoe Z.E.50 offers 245 miles from one charge, and the Vauxhall Corsa-E and Peugeot E-208 both aren’t far off, offering 209 and 217 mile ranges respectively.

Compared to SUV EVs, then, it’s not really much of a competition with any electric city car and its range capabilities. However, you also don’t have to generally do anywhere near as many miles when you’re doing short trips in a city environment as opposed to traversing the country in an SUV, so that needs to be taken into account. 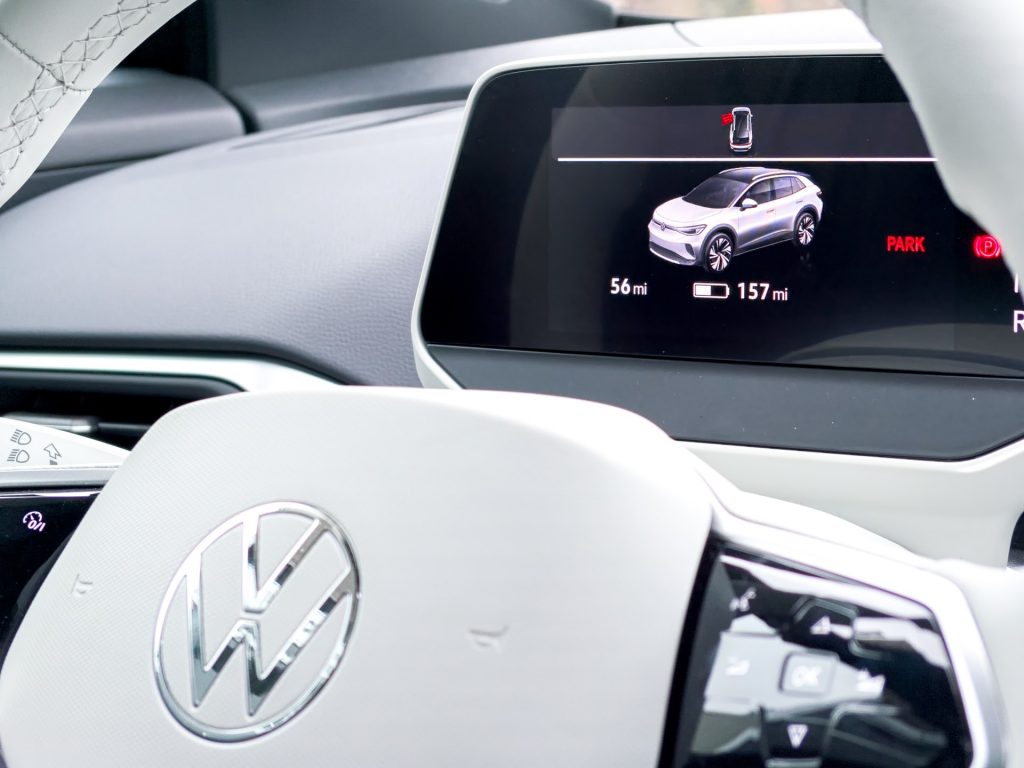 Proper full-sized family cars next, and the leader of the pack when it comes to EVs comes from our friends at BMW and the BMW I4.

This family car not only looks the part with battery and performance specs that rival anything on the market, but it also offers an incredible range of 367 miles from one single charge. That’s a wonderful number and more than enough to get the family almost anywhere in the country. The interior in the BMW is also top drawer, so it’ll be an extremely comfortable ride as well as fuel-efficient.

As we’ve covered above, the Tesla Model 3 variations offer a pretty good low to mid 300 miles from a full charge, and the Hyundai Ioniq 5 provides drivers with a brilliant 298 mile range. The Volkswagen ID3 doubles as a city and family car with its beautiful interior, high performance motor and battery, and competitive price point, and as we’ve already covered, it offers 260 miles for a charge.

Smart cars are some of the smallest electric cars on the market, and they’re particularly appealing if you’re not a fan of parking or having more than one passenger at a time.

When it comes to being range, however, Smart Cars aren’t exactly breaking any records, and the Smart EQ Fortwo Couple Electric Drive offers the largest range for any offering from Smart, and even that’s a mere 84 miles. The Cabrio edition is pretty much the same at 82 miles, and the Fortwo model is one mile behind with a range of 81 miles.

Not quite the dizzy heights of the Model X or Model 3, then, but still pretty good considering you’re unlikely to be doing large distances in a Smart car. And let’s be honest, it’s still better than petrol or diesel fuel because it’s much better for the environment.

Electric vans are still in the early stages of development compared to cars, so it’s understandable that the range isn’t quite up to scratch yet. However, the Fiat E-Ducato electric van has a pretty impressive 223 miles from a full charge, followed closely by the kings of the van world, Ford, and the E-Transit Electric van’s 217 miles.

It’s bit of a jump to the next in line for vans, and Iveco’s Daily Electric Van gives drivers 124 miles per charge, which matches the Renault Master ZE Electric van to the mile. And last but not least is the LDV EV80, which gives off 120 miles from one full charge. 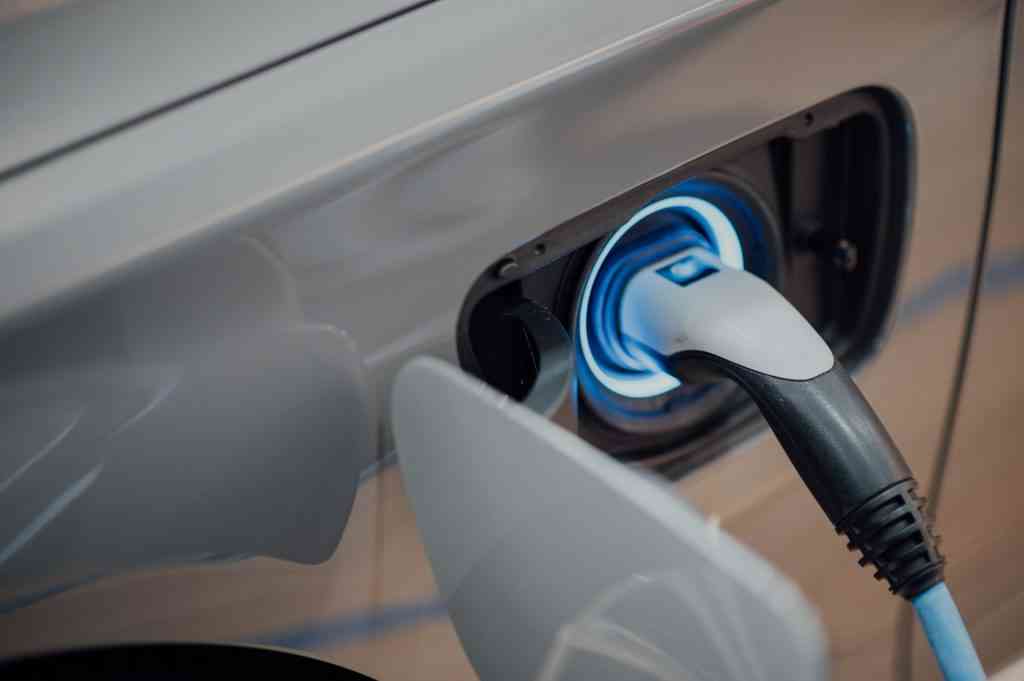 Ignoring the Tesla Model S Long Range and the Tesla Model S Performance and their 379 and 367 mile range, then top of the executive car list when it comes to range capabilities is the Audi E-Tron GT and it’s 298 miles.

This is matched with the exact same mileage as the Audi RS E-Tron GT, followed closely by the Polestar 2, which offers owners a 292 mile distance from a charging point.

So, there you have it, an extensive list of the longest range vehicles on the market today. If you’re looking to lease your very own electric vehicle, then look no further than the AVL website.