With electric cars becoming more popular here are some things you may like to know.

Buying a new electric car is a huge decision, not least because they’re still so expensive.

Unlike petrol or diesel cars, charging plays an important role in the purchase. Electric cars take hours to fully charge, while a petrol car which can be filled up in minutes.

Then there’s the question of how much the vehicle costs to charge. With so many different charging companies dotted around the country it can be difficult to know the definitive cost of charging your car compared to plugging it in at home.

The good news is that whether you’re out and about or at home, charging an electric car is much cheaper than paying for fuel. So while this new world can take a bit of getting used it, it’s absolutely worth it in the long run.

In order to take advantage of this though, you will have to get your head around how electric car charging works. It’s a bit fiddly, but once you understand it the whole process will feel like second nature.

In the UK there are four types of charging speed. Each gives you increasing amounts of electricity and so in turn will charge your car faster. They supports various types of plugs as well, as sadly they’re not all the same.

3.7kW and 7kW: These are the most common types of charger and can be found in homes, car parks, street parking and in supermarket car parks. All electric cars can use these, you might need an adaptor but you’ll get one with the car.

22kW: This is a much faster form of charging but is rarer to find. They’ll often be located in dedicated petrol stations or motorway service stations.

50kW: This is the upper limit currently for any car that isn’t a Tesla. Only cars that have CCS or CHAdeMO can support 50kW. They’re rare, and are usually only found in motorway service stations or in special charging locations within a city.

120kW: This speed is only available to Tesla vehicles (currently) and it’s only available if you use one of Tesla’s 40+ Supercharger stations which are dotted around the country.

There are four types of charging connector depending on which car you use. Don’t panic they’re usually all compatible with each other in some way and if they do the car manufacturer provides all the adaptors you’ll need.

This is by far the most common type of plug, it’s found in everything from the BMW i3 to the Tesla Model S. Type 2 supports everything up to 22Kw.

This is essentially Type 2 but with an additional port beneath it for rapid charging. Any car that supports CCS supports 3kW, 7kW, 22kW and 50kW.

This is a rival rapid charging pin and is found on the Nissan Leaf ad on Peugeot electric vehicles. If your car uses CHAdeMO it’s likely to support 3kW, 7kW, 22kW and 50kW but you’ll just be using a different plug.

Tesla uses a standard Type 2 connector but because they have their own exclusive Supercharger stations the Tesla can support charging speeds up to a whopping 120kW.

How long does it take to charge an electric car?

It completely depends on the type of car (and charging port) but thankfully with such a limited amount of electric car models on the road, it’s relatively easy to work out a rough charging time for each car.

The new Nissan Leaf takes around 7.5 hours to fully charge using just a 7kW charger. If you use CHAdeMO then you’ll go from 20-80% in around an hour. 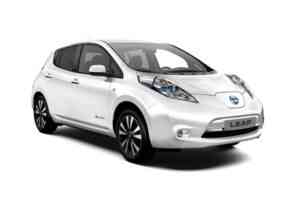 BMW’s new i3 can charge fully in around 4 hours through a 7.4kW charger at home. Of course thanks to its fast-charging CCS port you can charge it even faster at a service station or compatible CCS charging outlet.

The Tesla Model S 75D takes around 8 hours to charge fully using Tesla’s Wall Charger at home. If you’re using one of the Supercharger stations that plummets to under 2 hours.

How much does it cost to charge an electric car?

So this will vary greatly depending on the type of car you have and the size of its battery.

For example charging network Pod Point claims that the average electric car costs around £3.64 to charge at home. While this certainly applies to a smaller car like the 30kW Nissan Leaf, the 90kW Tesla Model S sets you back around £9.00 for a full recharge.

That’s still considerably cheaper than filling up a petrol station but as you’ll soon discover, charging outside of the home can start to cost more and more.

Here’s the pricing for some of the major charging networks in the UK:

With over 6,000 charging points around the UK, Chargemaster are by far the largest. Through their POLAR app you can pay £7.85 per month and then get free charging at over 80% of their chargers. For the 20% that cost money it’s priced at 9p per kWh.

Again, you’ll need to download an app in order to access their charging stations. Once you’re signed up though it’s 30p per unit of energy with a maximum charging time of 45 minutes.

Charge your car is one of the largest pay-as-you-go charging networks in the UK. There’s no monthly fee, you simply sign up online, you then get a contactless card and simply tap every time you charge. You’re then billed via Direct Debit only for the electricity you use out and about.

Tesla owners receive 400kWh of free supercharging every year (around 1000 miles), after that you pay only for the amount of electricity you use each time you plug in.

For example 300 miles of charge on the Tesla Model S costs around £18, still significantly cheaper than using petrol or diesel.

Shell’s petrol stations have started offering rapid electric car charging through their own PAYG scheme called Shell Recharge. It’s not cheap though, setting you back 49p per kWh. This is by far the most expensive charging option so we definitely wouldn’t consider this an everyday option.